A Campervan Trip To Find The Loch Ness Monster

A Campervan Trip To Find The Loch Ness Monster

To get to Loch Ness from Edinburgh takes about 4hrs by campervan. The simplest and quickest way is to follow the A9 to Inverness and then take a short 30mins drive from there on the A8082. 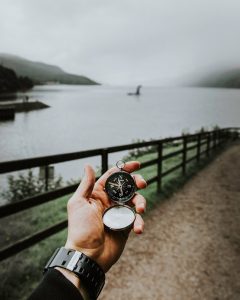 Loch Ness is one of the most beautiful places in Scotland, an inland freshwater lake that has almost 22 square miles of surface area.  In and of itself, Loch Ness has a draw for its natural beauty and water activities, but there’s another reason people visit.  Loch Ness is steeped in mysticism and legend for an ancient creature supposedly living in its murky depths.  The Loch Ness Monster, or “Nessie” as she’s more affectionately known, has captured the attention of thrill-seekers, cryptozoologists, and tourists alike for decades.  But what truth is there to this monster’s existence?  Has it all been a big myth?

Belief in the existence of Nessie is nothing new.  Reports of a creature living in the loch date back centuries, originating with the biography of St. Columbia in 565 AD which claimed something had bitten a swimmer in the loch’s waters.  The monster wasn’t content enough to go after one person and would have attacked another if St. Columbia hadn’t intervened and ordered the creature to go back into the water.  From then-onward, the Loch Ness Monster became a local legend with scattered sightings over the years until the 20th Century.

1933 saw the beginning of Nessie’s modern popularity, due in part to the road that was completed in this year and provided new access to Loch Ness.  On July 22, George Spicer and his wife claimed that they saw “a most extraordinary form of animal”.  Unlike most descriptions of the monster, however, the Spicers claimed that they saw the creature on land and it crossed in front of their car.  They also provided one of the most detailed descriptions of the monster, giving it the qualities of a Brontosaurus without limbs that lurched across the road.  A few months later, Hugh Gray provided the first “photograph” of Nessie, claiming to have taken it while taking his dog out on a walk.  Unfortunately, this was discredited thirty years later when advancements in technology revealed the photo to be nothing more than an otter rolling on the surface of the loch. 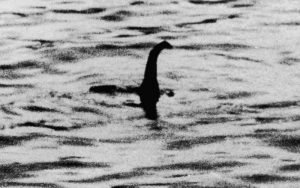 The next year furthered the public’s understanding of what the Loch Ness Monster looked like with a sketch done by Arthur Grant, who swore he nearly hit the creature while riding on his motorcycle.  This was followed by the most well-known image of Nessie to date, the “Surgeon’s Photograph”.  Taken in 1934, the photo was allegedly taken by London gynecologist Robert Kenneth Wilson and published in the Daily Mail.  Wilson apparently refused to have his name associated with it, and the anonymity provided the picture with an even greater mystery.  Depicting only the creature’s head and neck, it was the subject of speculation for at least 60 years until speculation by the community following the creature determined it had been created with a toy submarine and some carefully shaped silly putty.

In the meantime, though, the photo created a new surge of interest in the Loch Ness Monster and continued attempts to prove its existence.  Alleged video footage, sonar readings, hunting parties, and more each came to the loch attempting to prove Nessie’s existence—and each coming away without any definitive evidence.  This has continued even up to the present day, with amateur Nessie hunters presenting video and photographic evidence of ripples, strange occurrences, and other phenomena believed to be caused by the monster as clues to Nessie’s presence in the loch.  The most recent study occurred in 2018 and was published in 2019, attempting to sample DNA in the loch to find something unusual and ultimately determining that no strange creature lived there.

So whether you’re looking to go hunting Nessie or Not, Loch Ness offers something for everyone.