This VW vehicle, was introduced in 1950 as one of the earliest passenger vans, it is known for its iconic rounded nose and pop top roof. 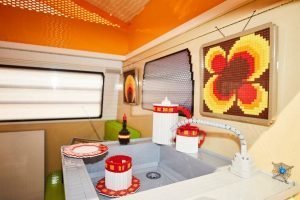 Revealed at the travel and leisure fair in Munich, Germany, this campervan was made with exacting attention to detail including a 1960s interior that features hotplates, a radio, and toothbrushes and toothpaste all built from Lego. 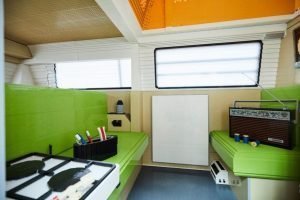 The work of just two men taking six weeks to build and tipping the scales at 1,550lb, this Camper is 40% lighter than the real thing. It’s the largest LEGO replica Volkswagen T2 Camper ever made and even has a functioning sliding door, head lights and even the famous Westfalia pop-up roof.

They worked to a strict construction plan they’d developed from 3D models of the original. However, this wasn’t entirely a trouble-free affair. At one point Hoffmeister and Lenhard discovered they were missing the transparent bricks they needed for the windows — 20,000 of them!

Start Your Own VW Campervan Adventure