Snow Road Adventure in a Campervan

A Snow Road Adventure in a VW Campervan

We hired a lovely modern and most importantly as we found, a heated VW campervan from Counting Sheep Campers in Scotland. Then we set off on our new adventure to tackle the snow road. Spanning 90 miles of snow-capped peaks, rugged glens, outdoor adventures, cycling, delicious food and drink the Snow Roads Scenic Route is a distillation of the finest elements of the Cairngorms National Park. Running through the eastern portion of this magnificent landscape, the route owes its name to the highest public road in Britain. Boasting some of the wildest and most dramatic Highland scenery imaginable. It’s also a route where you’re invited to really take your time to soak in the views, villages and nearby attractions.

So if you’re looking for a more leisurely alternative to increasingly busy routes like the North Coast 500. Here is a taster of what waits for you on one of the best kept secrets in Scotland’s road trip bucket list. 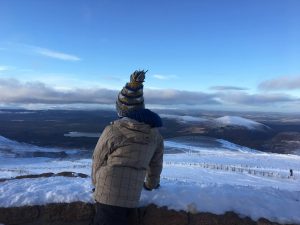 Epic scenery and so much more

As Britain’s largest national park at slightly more than 1,650 square miles, ‘epic’ doesn’t even begin to convey the sheer scope and majesty of this expanse, which stretches across the Scottish Highlands and Aberdeenshire. Fortunately, the Snow Roads gives you the chance to experience the natural grandeur of the place in the space of a day, if you choose. 90 miles in length, it may be relatively short compared to other driving routes through Scotland, such as the NC500 but it manages to pack an impressive amount of things to see and do along the way.

There are whisky distilleries including Balmenach and Royal Lochnagar; fairytale castles from Corgarff to the private home of Her Majesty, Balmoral, and even the snowsports destinations including Glenshee Ski Centre and The Lecht. From gentle ambles to the haunting ruin of the Well of Lecht to the myriad of footpaths in and around the Burn O’ Vat Visitor Centre, the Snow Roads offers plenty of short, easily accessible detours during the course of your journey. 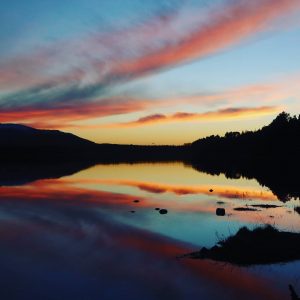 The famous Scottish weather can be at its most changeable in the Highlands. This is especially true on the route taken by the Snow Roads which reaches a dizzying height of 670 m (2199 ft) at the Cairnwell Pass. Azure blue at times with bright sunshine bouncing off snow-capped mountain tops, turbulent and filled with moody cloud formations at others, no matter the time of year the sky takes centre stage in this part of the Cairngorms. Even on rainy days, the Snow Roads still manage to surprise, from vivid, sudden rainbows appearing out of nowhere and atmospheric mists that drape over the landscape. 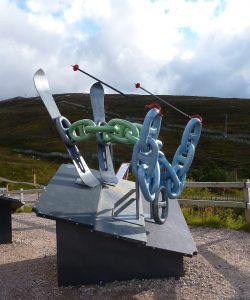 A campervan gives you the freedom to explore at your own pace so the route maybe only just 90 miles in length, but the Snow Roads isn’t a route you can just zip around. Steep climbs, ‘blind’ summits, sharp twists and bends, and single-track roads feature frequently, so be sure to drop your speed and drive with extra care. Embrace the slower pace and take the time to soak in the extraordinary views and give yourself plenty of time to explore the various attractions along the way. You can even extend your journey by an extra day or two and get out and really explore this lesser-known corner of the Cairngorms National Park.

There is no shortage of quaint villages and quintessential Highland towns to take in along the route. Starting in Blairgowrie and finishing in Grantown-on-Spey, the route passes Tomintoul before heading deep into the heart of Royal Deeside, clocking up Braemar, Balmoral and Ballater along the way. Wander these elegantly planned Georgian and Victorian communities with their independent shops, pubs and restaurants, and heritage sites. Ballater and Braemar are steeped in royal connections. Check out the many shops in both towns proudly displaying Royal Warrants that signify them as suppliers to the Queen, or pay a visit to Crathie Kirk, the church where the Royal Family have worshiped for generations. 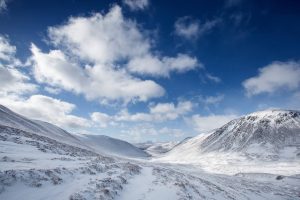 The Snow Roads provides access to many excellent walking routes throughout the wider park and Tomintoul, for instance, is an ideal base if you want to visit the Glenlivet Estate with over 100 miles of walking and biking trails. Seasoned walkers meanwhile can set out from Braemar to explore the rugged cattle drovers’ trail through the Lairig Ghru mountain pass to Glenmore and onto Speyside. The starting point along the route, Blairgowrie, also happens to be the start and finish point for the Cateran Trail, a circular 64-mile waymarked path that winds through the mountains around Glenshee on the southern fringe of the Park.

Don’t forget to tag #snowroads or visit the website Snow Roads for more information. The route even has its own app that you can download adding an extra dimension to your adventure.

Start Your Own Campervan Adventure