A campervan is the ideal way to travel the new route in the south west of Scotland named, the South West Coastal 300 or SWC300. It takes in over 300 miles on quiet roads running through Dumfries & Galloway and south Ayrshire and is perfect for a week long break of it time doesn’t allow a long weekend should be just enough.

The SWC300 has everything that you could want from an epic Scottish road trip. Think winding coastlines of secluded sandy shorelines and rugged cliffs, characterful towns and villages, and rolling hills and glens clad in heather inland. With plenty of opportunities to pull over, admire the views and lots of quirky locations to visit. 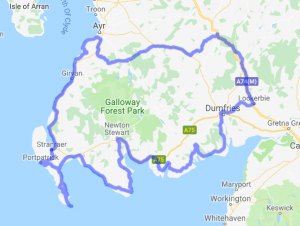 highlights on the South western coastal 300 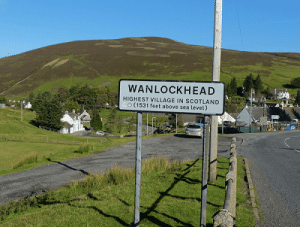 Wherever you decide to start it, and whatever direction you follow, the scenery along the South West Coastal 300 won’t fail to impress. More often than not, the light has a magical quality, as seen in this atmospheric capture of Southerness Lighthouse, the second oldest lighthouse in Scotland. Located on the Solway Firth, the walk to the lighthouse only takes minutes from the holiday village of Southerness.

This might look like the work of an artist, but an oil seascape this is not; it’s actually a photograph of Sandyhills Bay, near Dalbeattie. The tide goes far out into the Solway Firth, making the sea appear like a distant mirage. Near this sheltered beach is holiday park which accommodates tourers and tents. Bring a picnic and (on a warm day) enjoy a swim at high tide.

Once a hub for smugglers, the pretty village of Auchencairn is now a quiet coastal spot filled with whitewashed stone cottages. Beachcomb as you wander along the shoreline of Auchencairn Bay and gaze across to Hestan Island. 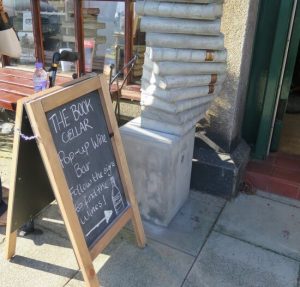 Known as Scotland’s Artists Town, Kirkcudbright is a chirpy place, with its blend of medieval, Georgian and Victorian buildings and a busy working harbour. There’s plenty of independent galleries to browse as well as the newly opened Kirkcudbright Galleries and the 18th century Broughton House, once home to Scottish artist EA Hornel. In the summer months, you’ll find a packed programme of events.

To say Whithorn is rich in history is an understatement; it’s here you can discover a past of Vikings, early saints and royal pilgrimages. Delve further back in time through the finds from archaeological digs carried out in the area and visit the reconstructed Iron Age roundhouse.

Lying south east of Port William on the Mull of Galloway is the tiny village of Monreith. Wander along the coastline above the church and see if you can spot a bronze otter. Sculpted by Penny Wheatley, this stands as a memorial to author Gavin Maxwell, who penned the novel Ring of Bright Water.

No visit to Dumfries & Galloway should be complete without a stop at one of the region’s majestic gardens. As well as Castle Kennedy Gardens, near Stranraer, Logan Botanic Garden, Glenwhan and Threave Garden also boast wonderful displays of native and exotic flowers and plant life.

As you travel along the coastline of south Ayrshire, you can’t miss Ailsa Craig lying 10 miles from the mainland, and there’s a good chance you’ll want to pause at the likes of Girvan and capture a picture. The blue hone granite from the island has long been quarried for the purpose of making curling stones. 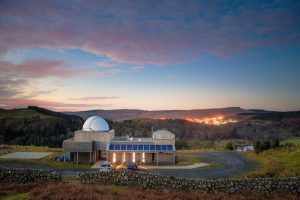 Located in the Doon Valley, Ayrshire, Dalmellington is home to the Scottish Dark Sky Observatory on the edge of the Galloway Forest Park. If you fancy stargazing when night falls, pre-book a visit to the observatory and see the wonders of the solar system reveal themselves.

Further inland, the landscapes might take you by surprise, especially when you encounter Crawick Multiverse. Located near Sanqhuar, this Charles Jencks-designed art land links themes of space, astronomy and cosmology and is an intriguing outdoor space to explore. 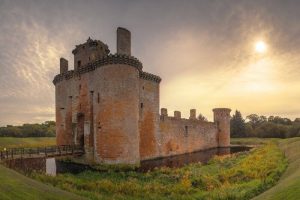 Take a slight detour from the route to visit the ruins of Caerlaverock Castle, which can be found not far from Dumfries. A triangular, moated fortress in local red sandstone, it dates from medieval times and has a fascinating history which includes many bloody borders conflicts. 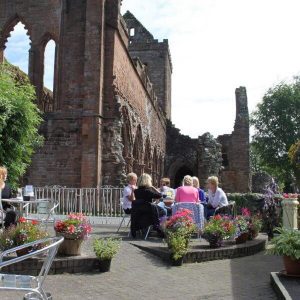 One of the most romantic places in Scotland, Sweetheart Abbey’s origins are a true love story and you won’t fail to swoon when you see it’s gorgeous location, situated between the backdrop of Criffel Hill and the sparkling waters of the Solway Firth.

So, whether you’re looking for a weekend break, week-long holiday or something in-between, the SWC300 offers you a route that has something for every kind of visitor.