The northern lights by campervan

|In Uncategorized
|By Mark Hibbert 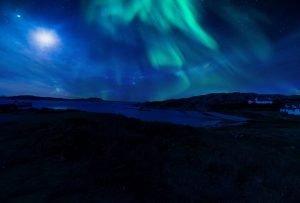 The Northern Lights by Campervan

Scotland, especially the north of the country, is a great place to see the amazing Northern Lights, or aurora borealis. This amazing night sky lights display is one of life’s must-sees and features on so many people’s bucket lists.

But the aurora borealis can be fickle. It seems to enjoy playing tricks. Sometimes, when forecasts predict no Northern Lights, they suddenly appear on the distant horizon. And on other evenings, when the lights a predicted as highly likely, they disappear behind clouds or fail to come out at all.

In a campervan or motorhome you have a superb opportunity to move around according to the aurora forecast and to sit inside your van, all cosy, and look out the window at the night sky. (Just remember to turn off the interior lights, pour a dram and stay awake for as long as you can.)

What are the Northern Lights?

How will I know if I am seeing the Northern Lights

The lights display themselves against a dark sky in a wide range of colours, although pale green and pink are the most common. You might also be lucky enough to see Northern Light displays in red, yellow, green, blue and/or violet. The lights form in all kinds of shapes from patches to streams, arcs, curtains or an eerie kind of glow.

Where to see the Northern Lights in Scotland

The further north you are the greater your chances of spotting a display. However, there are increasing reports of the lights being seen further south, such as in the Dumfries and Galloway Dark Skies Park.

Conditions also need to be right. So clearer skies and areas away from man-made light, such as urban house and streets lights, are best. A bright moon can obscure a good view of the Northern Lights.

You’ll also require some patience. A quick look outdoors is unlikely to give you a good result. When you think that there might be a good sighting (for example, you could track Aurora Watch UK) spend as much time looking outdoors or being outdoors as you can. As we said, the lights can be fickle.

2) Orkney Isles: Friends who live on Orkney report that they have seen the Northern Lights so many times that they sometimes stay indoors with the curtains closed when they here of a lights display. This level of nonchalance can only come when the Northern Lights come out to play so often. Pretty much anywhere is great for seeing the aurora when the forecast is good.

3) Caithness: This northern mainland region is another great place for seeing the lights. Our tip is to head for the coast and look north.

4) Aberdeenshire: Again, the northern coast is a good bet but anywhere with less man-made light pollution is likely to offer a good display when the forecast is set at “high likelihood”.

5) Moray: Another Scottish region with great coastal and rural opportunities for seeing the Northern Lights.

6) Outer Hebrides: The northern islands in this west coast chain, such as Lewis (in particular) and Harris can be great places to se the lights. Head for coastal spots and drink in the views of the horizon.

7) Skye: This westerly island is gaining great reports of Northern Lights sightings. Head for the most northerly tip if you can,

8) The Cairngorms National Park: On a good night you can see the aurora from almost anywhere that isn’t lit by man-made light. The night sky seems so big in this part of the country and it’s an amazing place to go with a campervan.

9) Fife coast: A stunning place to visit and a region that is sometimes blessed with a Northern Lights display – and especially if the aurora is strong.

10) Galloway Forest Park: As we said before, the UK’s only Dark Sky Park is reporting ever more displays of the Northern Lights. If you don’t see the lights you will definitely be treated to some fantastic star lit skies (so long as the skies are clear).