a campervan trip to balloch 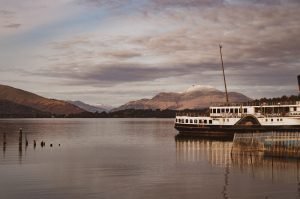 People first settled around Loch Lomond around 5000 years ago in the Neolithic era and there is evidence that Viking raiders ransacked the islands.

The lands around Balloch – which means “village on the loch” in Gaelic – were granted to the Lennox family in 1072 by King Malcolm III, and the original Balloch Castle was built there in the 13th century.

Loch Lomond became an established destination for visitors in the 18th century and was already popular enough for James Boswell to remark on his return from the Western Isles with Dr Johnson in 1773 that he did not need to describe it in his journal.

Balloch, which sits on the River Leven, grew up around the second Balloch Castle, the early 19th century country house built by aristocrat John Buchanan, bought by Glasgow City Corporation in 1915 and leased by West Dunbartonshire Council since 1975. The estate was designated a country park in 1980 and has been part of the National Park since 2002.

The Loch Lomond Shores leisure development opened in 2002 providing jobs for local people and a focal point for visitors. 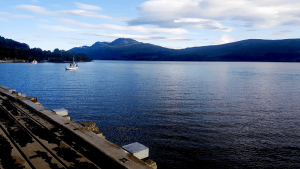 Whether you arrive in Balloch by car, train or boat, a walk around the marina is a must to get a feel for lochside life and admire the vast array of pleasure boats moored all year round.

A saunter along the boardwalk will put you in the mood for a boat trip, and you’re spoiled for choice round these parts. In spring and summer, the lovingly restored art deco paddle steamer Maid of the Loch makes for a beautiful sight on the water. Sweeney Cruises, meanwhile, sails all year round on a fleet of different-sized vessels, with daily hour-long trips taking in some of the loch’s 33 islands and recorded commentaries from Scots TV historian Neil Oliver. e town’s population of 5,000 rose by 80,000 when Oasis played in the park in 1996.

Back on dry land but continuing the watery theme, the Sea Life Aquarium at Loch Lomond Shores is home to sharks, rays and seahorses. Predominantly aimed at children, the exhibits are fun and informative.

Balloch Country Park has 200 acres of woodland, meadow, formal gardens, playparks and shoreline to discover. Follow the Fairy Trail of tree stumps, enjoy a picnic and, if the wind is up, fly a kite. A circular walk takes around an hour and the paths are in good condition which makes it accessible for all. In July, the Loch Lomond highland games – which grew out of the Balloch Show – draws spectators from far and wide.

What to do nearby

Pretty Luss, which many still know as fictional Glendarroch from cult 1980s soap Take The High Road, is just nine miles north of Balloch. It’s usually pretty packed in summer, but a crisp autumn or winter day can make for the perfect visit, featuring a walk along the shore.

It’s well worth the short boat trip to Inchmurrin, the biggest fresh water island in the UK, which even has its own 14th century castle. Both Robert the Bruce and Mary Queen of Scots are known to have visited the island, which has beautiful walks, beaches and the ruins of a 7th century monastery.

The stunning Falls of Falloch just outside Crianlarich are a 40 minute drive north. A spectacular backdrop for a picnic.

At 361m Conic Hill, which rises above nearby Balmaha, is the ideal “wee” hill for beginners and children. The views from the top, across Loch Lomond to Glasgow and beyond are awe-inspiring. The walk down is always sweetened by the thought of a well-earned lunch the Oak Tree Inn in Balmaha.

So, whether you’re looking for a weekend break, week-long holiday or something in-between, Balloch and the surrounding areas offers something for every kind of visitor. 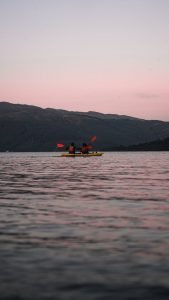